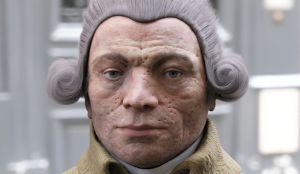 Massive media interest followed the digital reconstruction in late 2013 of Robespierre’s face and a new medical diagnosis by Philippe Froesch of the Visual Forensic Laboratory (Barcelona), a specialist in 3D facial reconstruction, and Philippe Charlier from the medical anthropology and medico-legal team at the Université de Versailles-St. Quentin, France. Their conclusion, reported in The Lancet in December 2013, was that Maximilien Robespierre suffered from sarcoidosis, a crippling auto-immune disorder in which the body’s defences attack its own organs and tissues.[1] He was dying from within before he was killed from without.

In making their claims Charlier and Froesch rely in large part on the evidence I adduced of his illnesses and their symptoms in a recent biography and article.[2] But they ignored my historian’s caution about the use of such evidence, raising troubling suggestions about the willingness of these medical researchers to sacrifice judiciousness for media publicity.

Some evidence seems incontrovertible: Robespierre suffered from a facial twitch; he was short-sighted; he had some smallpox scarring; and he was treated for a varicose ulcer. Most important, across the Revolution from 1790 to 1794 he was forced to absent himself from public life for increasing periods, from a few days to six weeks. There were at least eight such periods. He admitted several times that he was ‘exhausted’. In my recent biography I used this evidence to suggest that his ascetic lifestyle and remorseless workload made this extraordinary revolutionary prone to physical and nervous exhaustion to the point of collapse in 1794. It is well known that he was almost completely absent from public life for six weeks before his final appearances at the Convention on 8-9 Thermidor (26-27 July), but this final collapse was only the most prolonged in a long series, correlated with political crises in which he had been involved.

Other evidence Charlier and Froesch accept as “fact” – his consumption of oranges, his jaundiced complexion, his nosebleeds – may possibly be true but were among later allegations made by bitter enemies, such as Stanislas Fréron. In fact, virtually all the evidence we have about Robespierre’s physical condition derives from after his death and has to be taken with extreme caution since Robespierre was then the victim of a massive hate campaign. This sought to vilify him in many ways, including suggesting that his physical appearance was somehow disgusting or could be deciphered to reveal hidden vices.[3] The medical scientists have not allowed for these prejudices in a way that modern historians would.

Most important, the reconstruction of Robespierre’s death mask is almost certainly based on a fake. The lower part of his jaw had been blown apart by a gunshot (there has always been dispute as to whether this was the result of a botched attempt at suicide or from a shot fired by one of those sent to arrest him). His face was roughly held together by a bandage for about seventeen hours, and this was only torn off as he was about to be guillotined. His remains, and those of his allies, were then rapidly buried. There is no evidence that a death mask was made, and the mask used by Charlier and Froesch is suspiciously devoid of scarring on the jaw.

It is to be regretted that the conclusions drawn by Charlier and Froesch have been seized upon by journalists to make the most preposterous claims about this “monster” and “tyrant,” perpetuating the stereotypes constructed by his enemies immediately after his death in order to make him solely responsible for the excesses of “the Terror.” A properly historical account of his life tells a radically different story.

5 thoughts on “Making Medical Myths – the Case of Maximilien Robespierre, by Peter McPhee”