This has been a whirlwind week for revolution watchers world-wide. Ukraine remains unstable, Syria is flashing into red-hot crisis-mode, and now there is the Hong Kong situation or the “Umbrella Revolution” unfolding before our eyes!
Not to mention the mock demonstration mounted by Chanel during Fashion Week in Paris…. 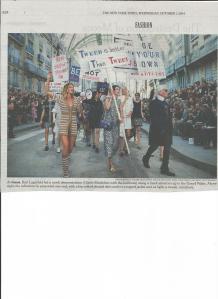 As seen in the photo, from the October 1 New York Times, Karl Lagerfeld led a group including Gisele Bünchen holding a bullhorn through a fake city street set up in the Grand Palais. The placards announce, “Boys Should Get Pregnant Too!” “Tweed is better than Tweet,” and “Be Your own Stylist.” (A couple in the back are in French but illegible in the photo.)
Perhaps the most obnoxious is the one announcing, “Be Different!”

Is that the most politics you can muster?
Whatever happened to the feisty French spirit of engagement or solidarité?

The mock demonstration of Lagerfeld et al. is tasteless, weird, and one might even say crudely irresponsible, given the many injustices encountered daily in France, and the legitimate revolutions trying to stay afloat these days, and whose freedom-fighters could use some support. Check out the photo of the protesters in Hong Kong, from the same day’s paper. 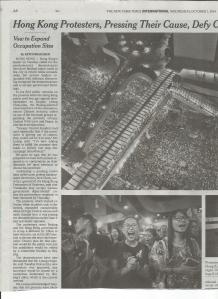 Consider the words of Martin Lee, whose article in today’s New York Times provides riveting reading. He begins, “At the age of 76, I never expected to be tear-gassed in Hong Kong, my once peaceful home. Like many of the other tens of thousands of nonviolent protesters in the Hong Kong streets last Sunday, I was shocked when the prodemocracy crowd was met by throngs of police officers in full riot gear…”
And especially read this part: “What would be worse, of course, is if the mandarins in Beijing conclude that global censure is meaningless, that over-reacting with tear gas and violence against peaceful protesters will cost them nothing but a few weak protestations from the world community.”

Hey, readers from the world community, that means you! that means us.