Today’s New York Times carries two splashy articles of interest to revolution-watchers, but a third, short piece buried in section C makes the most useful commentary on the way things are. The first article details the backlash of the Parisian intelligentsia to a new video game set during the French Revolution; the second article reviews Jennifer Lawrence’s role as leader of a people’s revolt in the Hunger Games series (Mocking Jay, Part One). Neither of them will surprise you much. The video game has incited anger because of its inaccurate portrayal of the Revolution, and especially its sympathetic depiction of the royal Bourbons. Reporter Dan Bilefsky suggests that such outrage is misplaced, given other more important issues facing the country, and dismisses the whole event in ironic ridicule, announcing: “only in France could a video game provoke an earnest philosophical debate over the decadence of the monarchy, the moral costs of democracy, the rise of the far right, and the meaning of the state.” Describing the sequel to the Hunger Games franchise, Manohla Dargis notes that the heroine’s “very survival has made her an existential threat to Panem” and that her bellicose actions in this installment “serve as a rebuke to the Capitol,” until the end at least. It appears that the film winds down to a rote handling of gender and war, where “Katniss Everdeen stands gaping at the rescue, with widening and watering eyes.” If it is unsurprising that an American reporter would scoff at the French outrage over the memory of the First Republic, it is also unsurprising that a Hollywood film would treat its heroine like “the girl.” Both media, the snide NYT reporting on French culture and politics, and the Hollywood film industry’s treatment of young women, can be counted on to perpetuate those stereotypes. 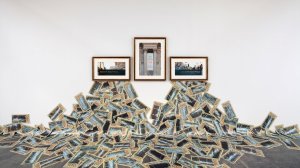 For a bracing wake-up call on the people’s power to change the world (or rather our impotence), readers have to look a little deeper into the paper. I suggest you look into the work of Hans Haacke, reviewed by Ken Johnson on page C24. Haacke’s work foregrounds the role of money, notably the money of the billionaire Koch brothers, who have helped conservative causes rise to unprecedented prominence in American affairs. It does so by making novel use of artistic media, such as the 13-foot-tall “Gift Horse” sculpture (soon to be displayed in Trafalgar Square in London), whose leg is harnessed to the London Stock Exchange. Or consider “Circulation,” which operates through a system of transparent tubes piping water–and power–across the gallery floor. As Johnson notes, this kind of art provides “sane thinking about the real world and its interwoven systems.”
Haacke’s exhibit at the Paula Cooper gallery is unlikely to lull observers into a feel-good sense of our superiority. It will most likely gnaw at your consciousness by reminding you of your insignificance.

And for that reason, exactly, it deserves our attention.