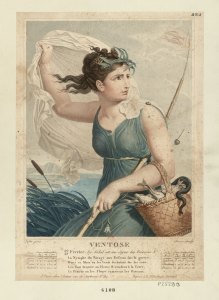 I was delighted to read the New York Times this morning and to discover that those alluring peasant dresses on the republican calendar (or a layered, complicated spin of such) are back in style!  But Vanessa Friedman‘s comment that “each month was named for a woman” was distressing. Really?  Can’t we dig just a tiny bit? As any student of the Revolution knows, the months are based on the weather in the Parisian region. So this month, ventôse, (based on “le vent”) is the windy month, while thermidor which runs through July, is the month aligned with Therm (from the Greek thermos,  hot).

Friedman bases her knowledge on “the brand’s collection notes” and comments merely on the aesthetics, writing, “So oil strokes of fruits and vegetables, love affairs and portraits were interspersed with gold glinting silk cloqué and deep velvet. And charms.” (Note the lovely fish bait, which looks like a charm, hanging from the line in Ventôse.)

More interesting is the writing of Jo Ellison, on Milan Fashion, who noted that the collection included “printed words, too: including ‘Germinal’ and ‘Thermidor,’ the months of the French Revolutionary Calendar when it was recast in the ‘era of freedom’ under the Republican government in 1793.” Even more interesting is the interpretation Ellison provides, asking: “Was there a hidden message in the fact that words once used to describe the springtime, and the heat of summer, were emblazoned on a winter collection? Was Mrs Prada passing comment on the transparency of the seasons in this new global fashion climate?” Now that is where good fashion journalism becomes good writing, capable of carrying us from one realm of thinking to another…

It carried me back to the original republican calendar iconography which is among the most beautiful art created during the revolutionary period. Featured here is the icon, signed Lafitte & Tresca, for Ventôse. The text reads as follows:  20/21 Février, le soleil est au Signe des poissons.

What do we learn from this old picture ?

I don’t know about you, but I’m getting tired of snow about now.

Vive le printemps! Thank you, Prada, for reminding us of our ties to the land and the seasons.

NB: The republican calendar was adopted by the Convention government in October 1793 and postdated to refer back to the founding of the French Republic on September 22, 1792. The calendar was thus launched in and dated Year 2. The French government employed the republican calendar from October 24, 1793, until December 31, 1805 (Year 14), and for eighteen days during the Paris Commune of 1871. It is fun to work with the calendar and see how the revolutionaries changed all the saints and symbolism. See Sanja Perovic’s terrific book for more info.