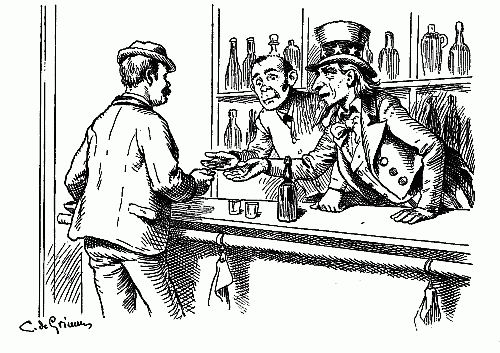 To lighten your sorrows about the state of the world today, here are some highlights of French history, culture and language associated with money and booze.  Answers will be published tomorrow.

1. What fine whiskey distilled in Angoulême has a name that recalls the revolutionary era?
a. Ça ira
b. Bastille 1789
c. Le Mas de Mirabeau
d. Domaine des Bourbons
2. What is the name of the financier who is (unwisely) ridiculed in print by Lucien de Rubempré, the ill-fated hero of Illusions perdues by Honoré de Balzac?
a. Sixte du Châtelet
b. Eugène de Rastignac
c. Jacques Collin
d. David Séchard
3. Describing the consequences that followed the French government’s issue of gold-backed bonds in the 1970s, when the price of gold later skyrocketed, a character in Michael Lewis’s Liar’s Poker says, “The fuckin’ frogs are getting their faces ripped off.” What is the name of those bonds?
a. L’Ordoré bonds
b. Marianne bonds
c. Mitterand bonds
d. Giscard bonds
4. Who wrote : “Quels drôles de métiers que les métiers d’argent” ? [What a strange profession, to work with money.]
a. Montesquieu
b. Albert Camus
c. Françoise Giroud
d. Anne Hidalgo
5. Why was May 1, 1791 a memorable day for the pocketbook of many French people?
a. It was the day when noble privileges were abolished, thus liberating peasants from paying a much-hated tax called la taille.
b. It was the day when the Catholic Church was outlawed, thus freeing parishioners from the need to tithe.
c. It was the day when indirect taxation was abolished on many consumer goods—such as liquor and wine—thus making them much cheaper.
d. It was the day when the National Assembly allocated a sum of 1,000 francs, as an early form of social welfare, to the widows of fallen soldiers of the Republic (les vainqueurs de la Bastille).
6. What sweet French liqueur has been honored in the last few years not only by Bon Appétit and The Wine Enthusiast, but was also by the New York Times, who called it “one of the most influential cocktail components introduced in the last decade”?
a. Pernod, made with star anise
b. St-Germain, made with elderflower blossoms
c. Cointreau, made with orange peel
d. Guignolet, made with cherries
7. One of the most surprising discoveries in Rebecca Spang’s new book on money in the French Revolution is her explanation of a rente viagère (a lifetime annuity) that was written on “thirty Genevan heads” or, more precisely, trente demoiselles de Genève. What is the meaning of this?
a. It is a pension offered to a deserving individual by a Swiss pastor, in the presence of 30 virgins from his parish.
b. It is a financial instrument created by a group of bankers, who subscribed money on the lives of 30 girls chosen from people in their own families, that is, the healthy young daughters, nieces and other relations of the bankers.
c. It is an honor that used to be conferred annually upon the most hard-working, sober, upright bachelor of Geneva. He was thereby invited to choose a wife from among 30 of the wealthiest maidens of the city.
8. In her 1992 study of upper-middle-class French and American mores, sociologist Michèle Lamont identified a striking difference in attitudes about charity and generosity to the poor. Whereas the Americans she interviewed considered altruism to be a definite priority or a “high status signal,” the French did not agree at all. Instead, they expressed compassion for the less fortunate by supporting:
a. Labor unions
b. The 35-hour workweek
c. The Catholic church
d. A strong welfare system
9. Although they were never enforced, the “Ventôse Decrees,” adopted under the leadership of Saint-Just during February-March 1794 (Ventôse, An II), deserve to be better known because they constitute the most radical attack on certain principles we have come to consider non-negotiable today. What did they propose to do?
a. They proposed wide-scale wealth distribution, under which the regime would confiscate aristocratic émigré property and distribute it to needy sans-culottes.
b. They proposed creating a secular society by replacing the French Catholic Church with a state covenant.
c. They proposed to lay the foundation for a true democracy, offering universal suffrage to all men and women over age 16, regardless of their income, status, religion, ethnicity, or race.
d. They proposed that individuals be free to choose what pronoun (il/elle/on) they would like to be known as, thus foreseeing the current debates over LGBTQ identity by over 220 years.
10. Which of the following French term(s) describes an alcohol-based drink?
a. Une fillette
b. La zeti
c. Le pif
d. Une marie-salope
e. All of the above

The answers will be published on July 15.  In the meantime, Cheers! & tchin tchin!