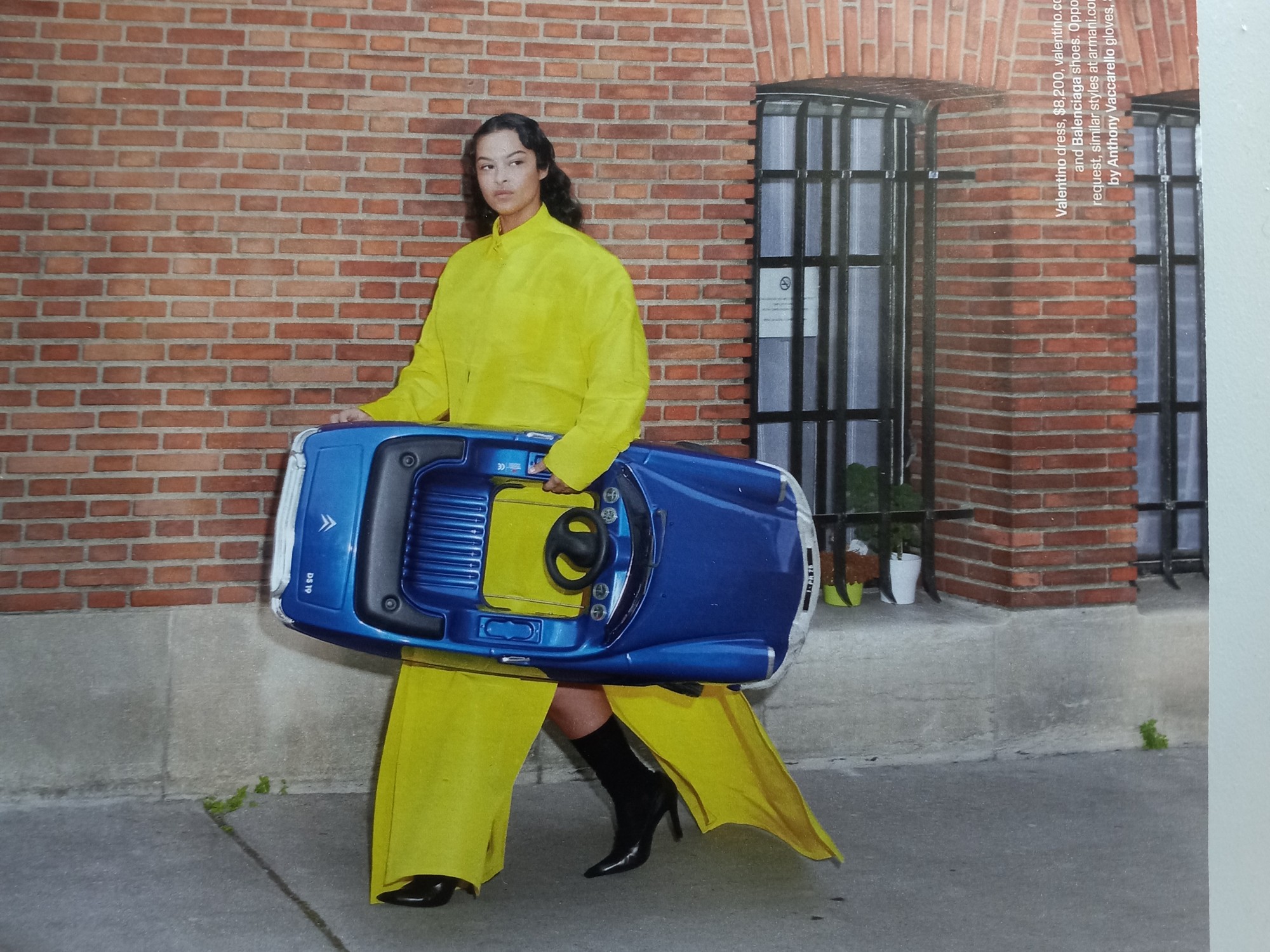 I’ve got style on my mind; outraged over the frivolous use of revolutionary symbolism hits again!

I cannot help returning to the spread in Sunday’s T Magazine (above and below) photographed in one of my favorite spots in Paris. Above, we see the gorgeous model strolling by L’Institut d’art et d’archéologie of time-honored memory wearing a bright yellow coat dress. Her expression is ambiguous: is it a desire for privacy, defiance, or fear? Why is she walking so close to the building? That a person of color would sport an $8,200 yellow dress made of the same fluorescent fabric as the vests of egalitarian protesters known as Les gilets jaunes, while walking through the chic 6e arrondissement, and that she’d be wearing socks that cost $115, could be considered progress. Yay her! This fictional character is probably not hurting for money. The toy she’s carrying–a kid-sized Citroën classic sports car–is adorable! Yay them! Yet the thought that she could be carrying it to some thoroughly pampered brat, un des privilégiés, further turns the knife in the observer’s eye.

(Ouch! what a horribly Buñuelian image that is…)

T magazine’s cover (above), shows the same model looking equally uncomfortable in a Marilyn Monroe-esque pose, as her aluminum foil dress billows out behind her in a scene more reminiscent of Jiffy Pop than flirty innuendo. The deliberate inclusion of “rue Michelet” piques the sensitive pride of any historian of the French Revolution, as if our beloved mentor / story-teller of the mythic past would approve of such frivolity. (What would Jules do?!)

My point is that it feels offensive to see fashion so blithely appropriating what could be a potent symbol. If the model is a person of color, then everything is OK? Is that the message? And of course, it also irks me to think of some billionnaire woman of any race wearing this dress at some high society event (where they consume endangered song birds too, no doubt) as a snub to the plebs. So Marie-Antoinettienne! Reminds me of the student I once knew, who, in a discussion about the lack of political protest on the University of Notre Dame campus, admitted with arresting honesty, “Why should we? We’re the 1%.”

For a more politically-savvy way to salute the rebellious French spirit, check out the Paris révolutionnaire / Paris in revolt pillow. These chubby throw pillows (14″x14″x4″) made by yours truly at HGBG, are artworks in themselves, and they also come with an explanatory text for future cocktail party banter. The letter explains how the design combines politically-charged fabrics–the worn blue jeans of the sans culottes, the gold satin of the monarchy, the fluorescent yellow polyester of the gilets jaunes, pink cotton with portraits of French queens, and a tricolor flag–to engage the person’s mind in historical reflection (as well as the body’s aesthetic senses of pleasure, bien entendu).

Allez, c’est à vous de choisir… the choice is yours.